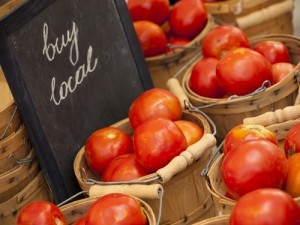 Fortunately, Farmer’s markets have been growing in number all over NYC and there are several resources to locate them.  One of the best ways to find your local farmers is to sign up with your area’s Community Supported Agriculture or CSA.  Signing up for a CSA is an excellent way to make sure that you receive the best seasonal produce, picked literally just for you.  If you are unfamiliar with this program, it is deliciously simple!

CSAs are also accessible and growing in number in the City.  This is my third year with Corbin Hill Farms CSA and I so look forward to another season.  Not only are they affordable and expanding their distribution sites throughout Harlem and the Bronx they help foster a true sense of community in the areas they operate that is very appealing.  If you’d like to learn more please go to their site.  If you are a member of another CSA or shop at a Farmer’s market that you love, please post and share your experience to inform others and expand this movement of supporting sustainable agriculture, building community, and getting healthier in the process!   #RootforRealFood

"...I love that Harlem Chi isn't just about being "alternative" but is about getting results." D. S.